Stay in the flow by stacking your PRs with Graphite

I like small pull requests; I like them a lot! They are easy to review, bugfix, deploy, and migrate because the changes are much more atomic. They are less likely to conflict with the work of our teammates and are an excellent way to get feedback from our reviewers earlier. While small PRs are commonly accepted as an ideal to aim towards, they are also hard to hit consistently.

That is because of reviews. We make a delightful 100-line PR, proudly mark it as ready for review, and then… wait. What can we do in the meantime? Maybe: 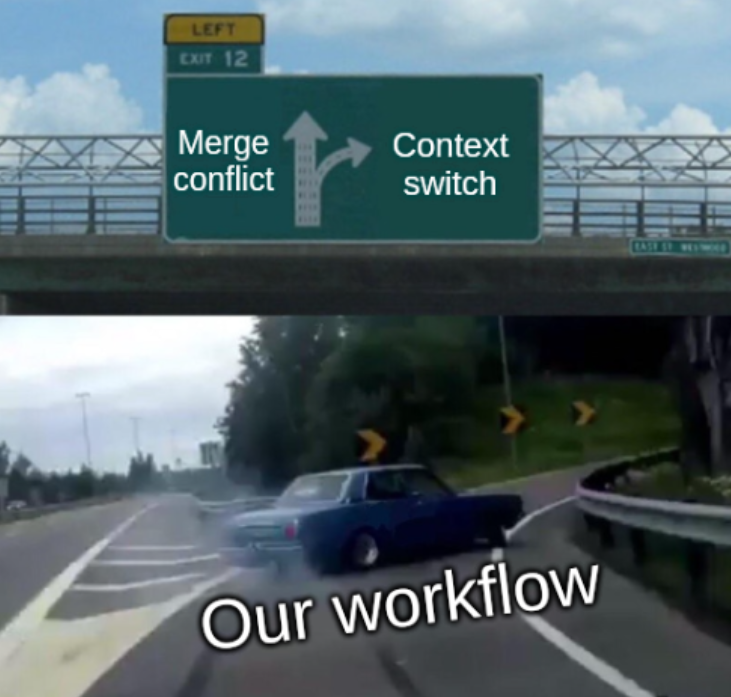 Either way, we have now completed the next item; what now? Let’s do it again. And therefore, by the end of the day, the damage is done. We will either be mentally scattered by too many different tasks or emotionally shattered by the inevitable rebasing. And all we wanted to do was the right thing.

So, eventually, we’ll wise up and start writing vast PRs, that allow us to stay in the flow longer, rebase less frequently, and not be blocked by pending reviews as often. But now we feel ashamed because we have abandoned the ideal. Yet, we had no choice, right?

Imagine creating multiple branches, where each branch is one commit, and each commit follows the next one. The collection of branches linked together can be called a “stack” and is the result of following option #2 (branch off current commit)

This workflow is possible but also very painful in many cases. For example, if commits are added or rebased in branch_one, branch_two and branch_three will often need to be rebased and any merge conflicts must be addressed. Rebasing becomes lengthy every time we alter a commit in the middle of the stack.

Graphite makes the process of working with stacked PRs much easier. It can rebase and update a whole stack in one command, is much better at resolving rebases than the standard tooling, and works wonderfully in the terminal.

You can read the Graphite documentation here 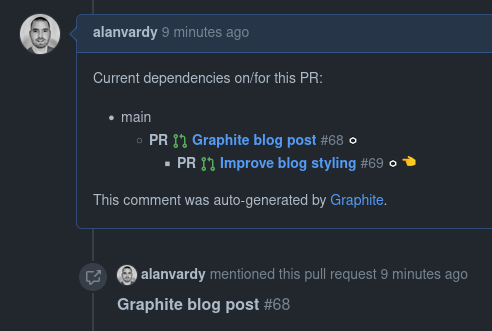 Furthermore, it can show the relationships in the terminal and lets us navigate up and down the stack with commands like gt up and gt down 3

And the free version is more than enough to reap the benefits.

Being able to stay on the same task is enormous. A big part of developer happiness is the experience of being able to work for long stretches on challenging problems. This workflow enables us to batch up coding sessions and deployment sessions and does not leave us blocked by reviews. We can feel motivated to write more code as there is no brick wall waiting for us once the PR is up for review.

Pull request reviews generally come in bursts. There will be long periods of no movement punctuated by sudden acts of mass review. This behaviour matches up with the common preference of batching up work. Therefore, the more PRs we can have ready when the next reviewer comes along, the more throughput we can manage.

The order in which we deploy matters, especially when it comes to microservices.

Each of those PRs will have to pass the continuous integration tests, so we write tests and verify functionality in tighter loops. We can also work on the next PR in the stack while the previous one runs through CI.

I’ve found that my tickets are getting more detailed, and I am not just describing my work in smaller chunks, but I am also writing more detailed deployment instructions around VMs, migrations, and monitoring. It’s easy to miss these things when tickets are for larger scopes of work.

It helps when we are better organized

Since you might be much farther ahead in the stack when a PR at the bottom of the pile gets merged, it is essential to note down actions that we need to take after merging like:

Otherwise, we will miss things.

You will still need to rebase occasionally

Don’t manage more than a stack or two

The temptation is there to create many stacks or forks of stacks, but I recommend avoiding it because it brings back all the downsides of context switching. Instead, stay on the same task and add another PR to the stack.

Stick to one commit per branch

When I first started, I tended to push multiple commits to the same branch and then use interactive rebase to either squash or drop commits. However, rebasing this way outside of Graphite ended up breaking Graphite’s stack metadata, so I recommend using a single commit and amending it as you go.

Some notes about tooling

I like working with one ticket per PR and thus start with a ticket that describes the changes and actions to be taken once merged.

The long way of doing this would be

I created a fish alias to do this in one command.

Add onto your existing work by amending the current commit instead of pushing up a new one.

I recommend aliasing this too.

Set PR as ready for review

Once I am ready for review, I run the following to turn my draft PR into a regular one:

So we have a bunch of reviewed PRs; what’s next? The nice thing is that we are not blocked. This means we can merge and deploy our reviewed PRs once enough are ready to go (or once we feel like deploying things). I periodically sync up remote and local and rebase off the main branch.

I generally merge branches one at a time into the main branch (starting from the “bottom” of a stack rather than the “top” if you visualize the stack as sitting on top of the default branch. Incrementally from the bottom allows me to do one deployment per PR and gradually push the work into production. Before merging, I read the ticket notes and follow the instructions past me left.

I have gotten a great deal of value out of Graphite and stacked PRs over the last month or so of using it at work, and I recommend checking it out - especially if you find yourself context-switching while waiting for code reviews.

Automate your Rails updates on GitHub

Increase the number of files git can track